RBSL and Rheinmetall Landsysteme have jointly awarded a contract, worth £180m, to Thales UK to supply the state-of-the-art PROTECTOR RS4 Remote Weapon Station (RWS) and the latest in automated threat warning – the Acusonic® Shot Detection System – for the British Army’s new Boxer vehicles.

Thales UK, as a strategic partner to Kongsberg Defence and Aerospace, will fully assemble and integrate 500 RWS and deliver 500 Acusonic systems onto Boxer vehicles over the next 10 years, as part of the UK MOD’s Mechanised Infantry Vehicle (MIV) programme.

The work for Boxer will be completed at Thales’s facility in Glasgow, which employs 700 skilled engineers and technicians.  As a major contributor to the Scottish economy, this contract will support further growth and protect key manufacturing skills in the UK, including 30 apprentices currently receiving training in Glasgow.

The MIV programme aims to support and enhance the UK supply chain.  As such, RBSL and Rheinmetall Landsysteme are part of a MIV Joint Procurement Team, which has engaged suppliers in England, Wales, Scotland and Northern Ireland and has begun awarding a series of supplier contracts for the MIV programme.

Following this contract with Thales UK, the Boxer vehicles will be equipped with the latest PROTECTOR RS4, which incorporates a range of new sensor technologies.  The system offers a 360˚ observation and engagement capability, as well as armoured protection for the crew whilst firing the weapon.

The Acusonic Shot Detection System is designed to accurately sense and report the direction of incoming enemy fire.  The system will give the Boxer vehicle’s crew the critical situational awareness to react to threats.

“We look forward to working with Thales UK on the delivery of these Remote Weapons Stations, knowing this contract will not only contribute to the safety of British military personnel on the front line, but also support industry growth here in Scotland.

“Protecting hundreds of jobs and supporting 30 apprenticeships, this £180 million UK Government investment further demonstrates our commitment to supporting the defence sector in Scotland and underscores the many opportunities available within the United Kingdom economy.”

“This £180m contract with Thales UK will deliver pioneering surveillance and protection for our front line soldiers and our new Boxer fleet. We depend on skills and technology from across the United Kingdom and this order will secure 700 Scottish jobs.

“Our troops face a myriad of new and emerging threats so it is imperative we invest in critical detect and destroy technology such as this.” 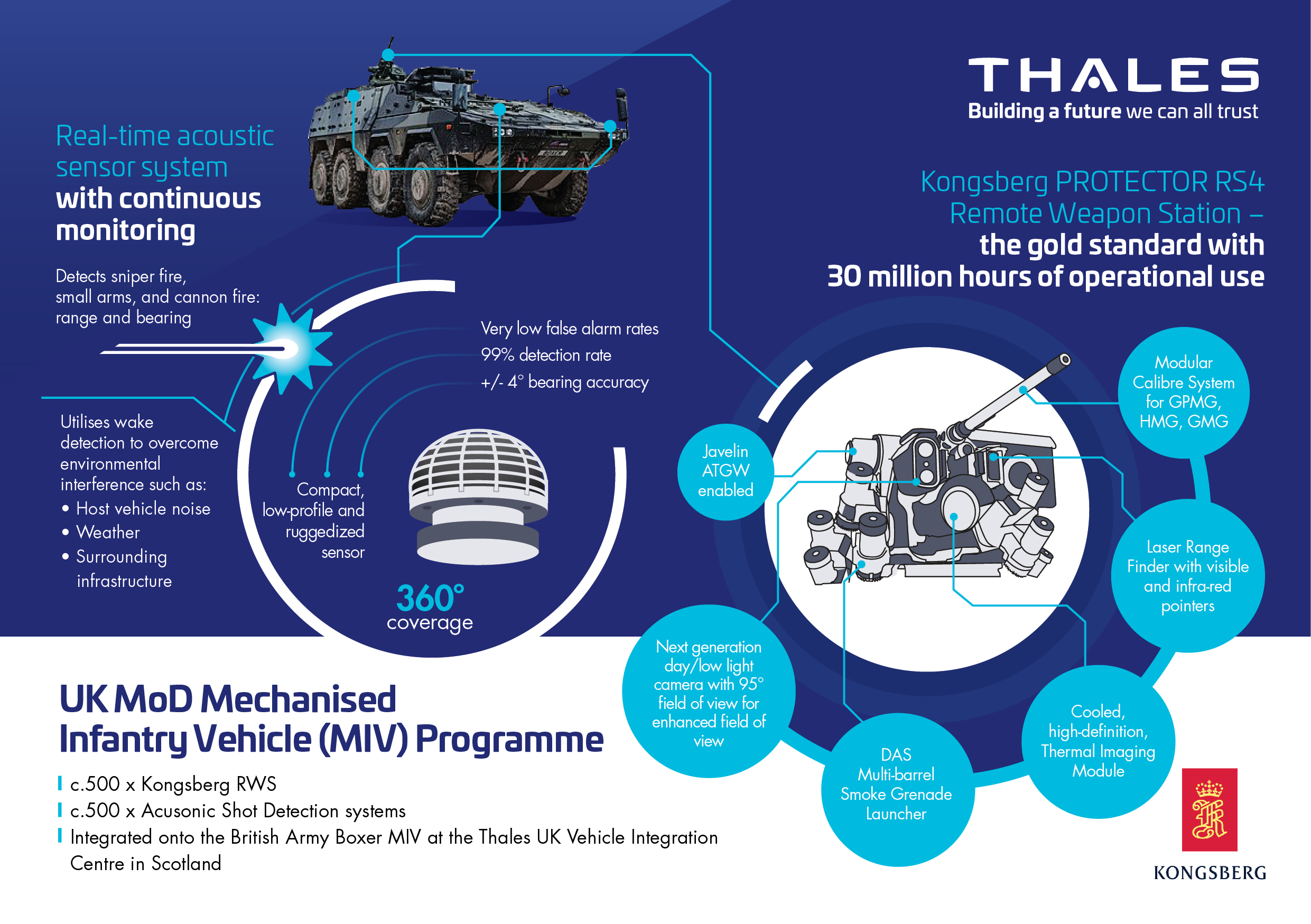